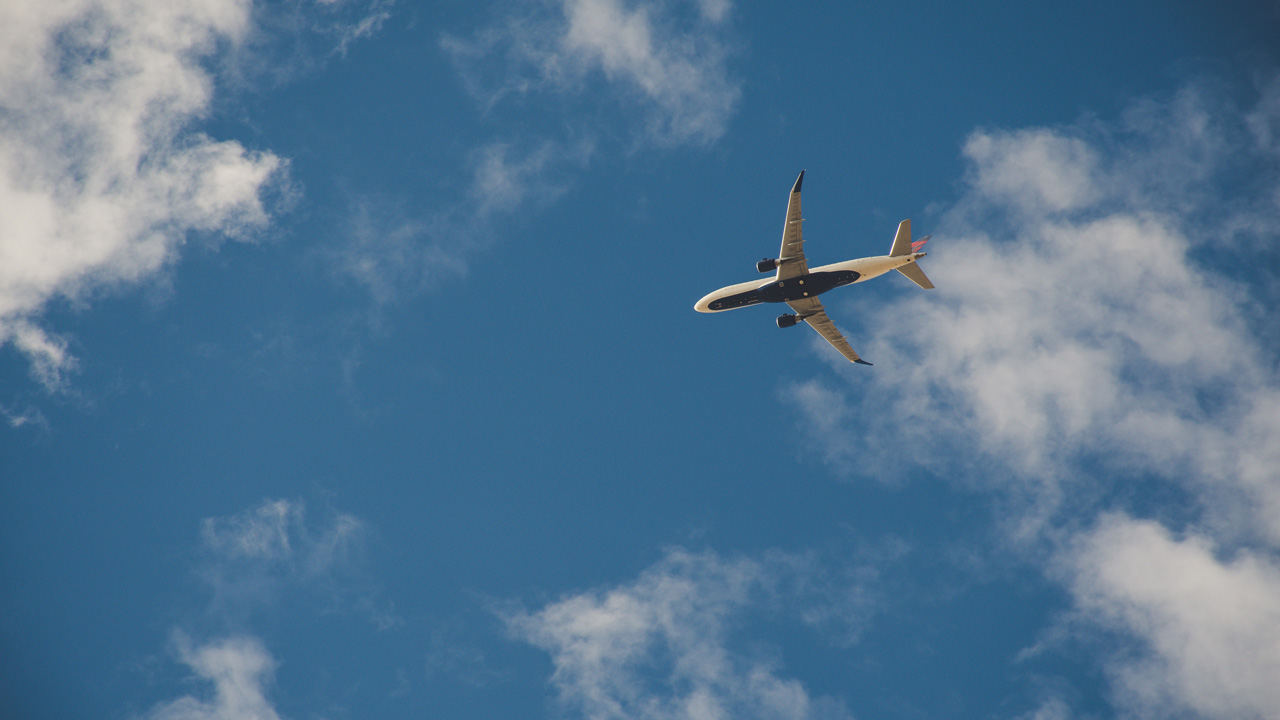 The aviation industry is poised to consume one-quarter of the earth’s carbon budget by 2050 under the 1.5-degree pathway if we continue with business-as-usual (Image credit: Brett Sayles/Pexels)

Globally, we throw away an astounding amount of waste — over two billion tonnes of household garbage a year. Imagine if we could turn some of that garbage into sustainable fuel to power airplanes. Sounds too good to be true? In fact, it is already a reality.

Today, companies such as SAF pioneer SkyNRG are developing facilities that can turn all sorts of sustainable resources like waste oils, household waste, or even carbon dioxide from burning fossil fuels into sustainable aviation fuel (SAF).

A Greener Way to Fly

Since SAF is made from waste-based feedstock, it also plays a role in developing a circular economy, said Sjoerd Raijmans, SkyNRG’s project lead for future fuels. He was speaking at a recent webinar entitled Sustainable Flying: A Paradox?, part of Temasek’s Ecosperity Conversations series.

It is no surprise that the benefits of SAF far outweigh that of conventional fuel. It has a lower carbon footprint than conventional fossil jet fuel, and does not compete with food resources if made from sustainable feedstock unlike first-generation biofuels commonly made from corn and wheat. SAF could even benefit livelihoods by providing revenue for waste that would have otherwise been discarded, said Raijmans.

Depending on the technology used, SAF in its pure form can reduce up to 95% of carbon emissions over its lifecycle compared to conventional fossil jet fuel. This drastic drop in carbon emissions is especially significant when you consider the urgency of tackling the existential threat of climate change. As our planet continues to heat up, collective action is needed to cut greenhouse gas (GHG) emissions before we reach the point of no return.

To that end, the aviation industry has committed to a net reduction in carbon emissions of 50% (equivalent to 325 million tonnes) from 2005 levels by 2050. Add to that the fact that the industry emitted over 900 million tonnes of GHG in 2019, and it is clear that more has to be done — now.

Global air travel has increased by an average of 6-7% annually in the last decade. While COVID-19 has impacted air travel, we can expect a post-pandemic travel boom. Pent-up travel demand could lead to an increased demand for aircraft fuel by more than 50% until 2050, compared to pre-COVID levels.

“SAF is a key in-sector decarbonisation lever,” said Shamsul Leman, Manager, Sustainability (Environment) at Singapore Airlines (SIA). While other new technologies such as hydrogen and electric planes will also play a role in decarbonising the aviation industry, Shamsul noted that such innovations will take time to become viable, in particular for medium- and long-haul flights which account for 73% of the industry’s emissions. As such, leading up to 2050, SAF is all the more critical as a decarbonisation lever for airlines like SIA which has no domestic market and flies to long-haul destinations.

Meanwhile, SAF, a drop-in fuel, can be used today. As the term suggests, SAF, when blended with conventional fuel can be “dropped” into airplane engines without any equipment modifications. Since it has the same characteristics and specifications of conventional fuel, airports will not need to undergo the hassle of costly infrastructural changes either. 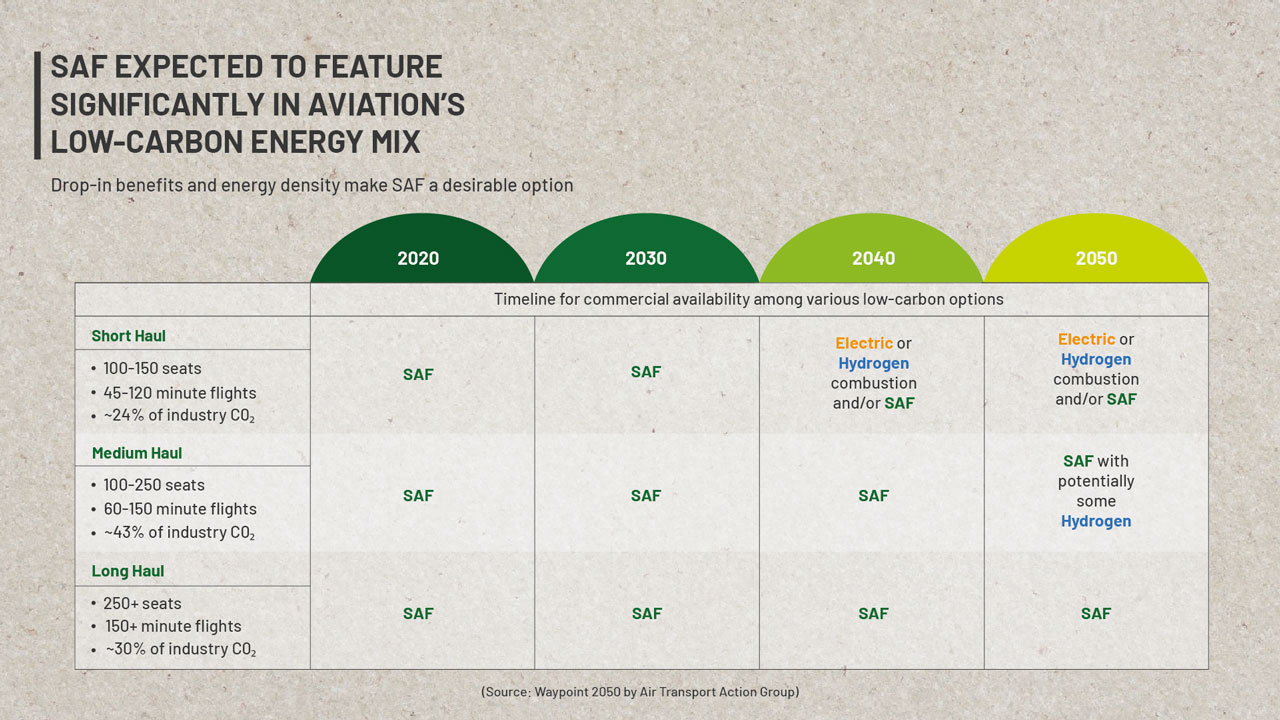 Several airlines have already successfully trialled SAF on commercial flights, with the very first trial taking place over a decade ago. While it is still a relatively nascent market, SkyNRG’s Raijmans predicts that the production capacity of SAF could grow to over 2.7 million tonnes — or just under 1% of global aviation fuel needs — by 2025. This represents a significant increase from about 100,000 tonnes today.

A host of factors is driving this. For one, policymakers recognise the need to decarbonise the aviation industry — and the potential of SAF in doing so. As a result, several countries in Europe are charging ahead with blending mandates, with the European Union putting forward the ReFuelEU initiative to boost the production and supply of SAF. Major airlines and large corporates like KLM Royal Dutch Airlines, Cathay Pacific and DHL are also banking on SAF, snapping up supply with long-term agreements. Cathay Pacific, for example, will purchase 1.1 million tonnes of SAF over 10 years from biofuel provider Fulcrum BioEnergy; this will cover about 2% of its total fuel requirements starting 2023.

In addition, many airlines have committed to reducing carbon emissions. SIA has also pledged to achieve net-zero emissions by 2050.

Singapore’s national carrier started its SAF journey back in 2011, when it joined the Sustainable Aviation Fuel Users Group (SAFUG), an initiative that aims to help bring SAF to market. SIA has since deployed SAF through two separate partnerships: one in 2017 with the Civil Aviation Authority of Singapore for flights from San Francisco to Singapore, and most recently in 2020, a year-long partnership with Swedavia, a network of Swedish airports, for flights departing Stockholm. The result: 414,000 kg of carbon dioxide saved, equivalent to removing the carbon emissions from charging over 50 million smartphones1.

So why are there not more airlines using SAF? One of the key barriers that the industry faces is the high price point of SAF, said Shamsul. Today, SAF costs about three to five times more than regular jet fuel. To bring the cost down, the speakers agreed that all ecosystem players — from policymakers and airport operators to airlines and fuel suppliers — must work together. Sharing of costs could be one possible solution. For example, SIA received a 50% subsidy on the premium cost of SAF through its partnership with Swedavia. Armed with learnings from the two initiatives, Shamsul highlighted that logistical challenges such as a segregated supply chain will also have to be addressed. That was the challenge that SIA faced in its first trial in 2017; mixing SAF in common fuel tank farms was not something that had been done before at San Francisco airport. A segregated supply chain was used and SAF had to be delivered to the aircraft via alternative modes of transport like trucks, before being uplifted on-site and mixed with remaining jet fuel from the hydrant — an extremely time-consuming and costly process.

Trials by airlines and airport operators have demonstrated that SAF can be safely mixed in common fuel tanks. Airports with existing fuel infrastructure that can deliver SAF, such as Changi Airport, are equipped to take on an integrated supply chain approach.

Gerald Ng, Director, Environment and Sustainability at Changi Airport Group, shared that the airport has been keeping a close eye on developments in SAF. As part of its commitment to lower its carbon footprint, the airport has been engaging airlines, government agencies and other industry players to accelerate SAF adoption. He noted that a sizeable proportion of Changi Airport’s flights are medium- to long-haul, which naturally have a larger carbon footprint due to the longer distances travelled. To grow as a sustainable aviation hub, Changi Airport will have to tap on decarbonisation solutions such as SAF. The aviation industry has committed to a net reduction in carbon emissions of 50% from 2005 levels by 2050 (Image credit: Shawn Ang/Pexels)

“We have to be at the forefront, [and ensure that] our fuel infrastructure and commercial agreements with fuel suppliers are in place,” he said. When the demand picks up, “it’s all systems go”.

Thanks to its robust fuel supply infrastructure, Ng believes that Singapore can benefit from the transition to SAF. SAF can easily be transported to aircraft here via the same network of underground pipes and fuel hydrant system that brings conventional jet fuel to aircraft at Changi Airport. The country’s well-developed petrochemical industry also provides it with the infrastructure and access to raw materials needed to become a SAF production hub.

That said, Ng acknowledged that Singapore is but one country. “We need a coalition of airports around the region and the world to be open to the possibility of uplifting SAF,” he maintained.

We need a coalition of airports around the region and the world to be open to the possibility of uplifting SAF.
Gerald Ng, Director, Environment and Sustainability, Changi Airport Group

The conversation then turned to another key figure: consumers. While most of the work to be done admittedly lies with the rest of ecosystem now, passengers have a role to play too, especially when travel picks up again. For a start, consumers can help by opting to use SAF to mitigate their own carbon footprint when they travel. According to the World Economic Forum, evidence shows that there is strong demand from corporate flyers to fly more sustainably, such as through SAF; results from a quick poll during the webinar backed that up.

Support from non-aviation stakeholders is also important to scale up the SAF market. Programmes like SkyNRG’s Board Now programme offers a practical solution for organisations looking to decarbonise their air travel. The programme allows corporates to offset emissions from their employees’ or cargo flights by committing to the offtake of SAF from a production facility under development.

With climate change affecting all of us, it is clear that all parts of the ecosystem — policymakers, airport operators, airlines, fuel suppliers, right down to corporates and consumers — will have to work together to pilot the aviation industry towards a more sustainable future.

[1]: The conversion is an estimation using the calculator at www.epa.gov/energy/greenhouse-gas-equivalencies-calculator

This article was based on the discussions at a Ecosperity Conversations webinar by Temasek. Watch the webinar recording below:

Would you pay to use SAF?

SAF plays a critical role in decarbonising the aviation industry. However, one of the challenges in scaling up the adoption of SAF is the price premium over conventional jet fuel.

Consumers can help by opting to use SAF to mitigate their own carbon footprint when they travel. Would you use SAF to decarbonise your travel footprint? How much would you be willing to pay for it?

Tell us in the short 1-minute survey below.

What is sustainable aviation fuel and why is it important for the aviation industry? 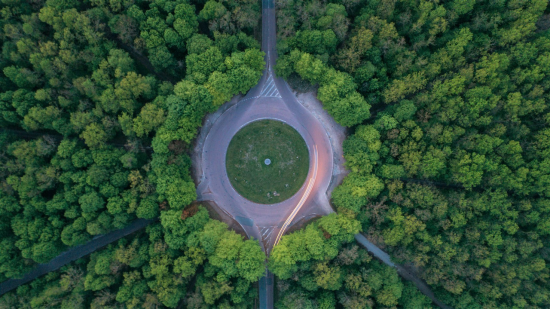 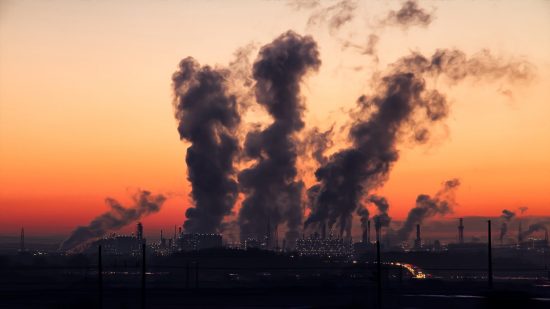 The Business Case for Carbon Pricing